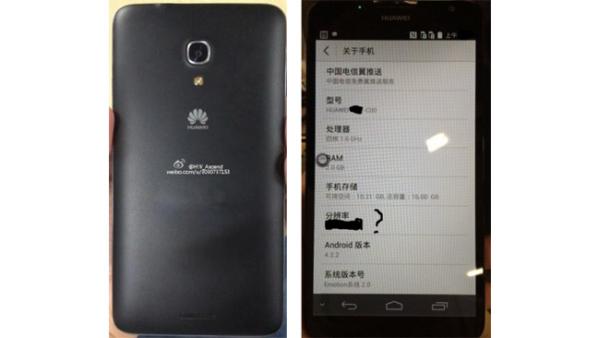 When the first Huawei Ascend Mate was launched earlier this year many were surprised at is screen size but as the year has gone on we have seen similar sized devices emerge such as the HTC One Max. Now the Huawei Ascend Mate 2 has been leaked but its release may bring a mixed response given its specs.

The original Huawei Ascend Mate brought the smartphone world a 6.1-inch touch screen display, but now the image that you can see on this page is allegedly of Ascend Mate 2 that is set to be launched at Januarys CES 2014 event in Las Vegas, Nevada.

There are some specs that accompany the leak that include a quad core processor clocked at 1.6GHz, and it is thought that the 6.1-inch display will now offer Full HD 1080p resolution along with 2GB of RAM and 16GB of on board storage.

It is being suggested strangely that the Huawei Ascend Mate 2 will be released running the Android 4.2.2 Jelly Bean operating system along with the company’s Emotion overlay, but you would have thought the device would launch running the latest version of the Android ecosystem 4.4 KitKat.

This could still happen but if the device does release with a year old operating system on board it could put a lot of potential buyers off the handset, but as we get closer to CES 2014 more information is likely to get leaked providing more information about the Huawei Ascend Mate 2.

Have you ever considered a Huawei smartphone?