Cell phone crashing at the airport must watch prank video 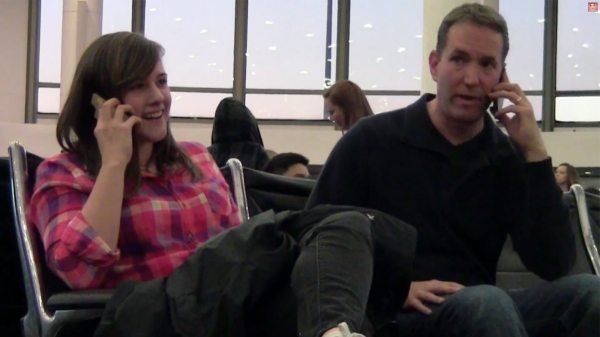 We have all been in an airport and had to listen to other cell phone user’s conversations, an airport is very loud and that means users have to speak even louder to hear what the other person is saying. This is where crashing their calls becomes fun, and a video going viral.

You either love it or hate it when you have to listen to people on their cell phones talking loudly in public, and thanks to Greg Benson and his video posted on his YouTube account called Mediocre Films he shows us what can be done if people are being a little too loud on the phone.

Crashing people’s calls is what this video is all about, Greg is on a pretend phone call on his cell phone and then sits next to people on their cell phones and basically answers everything they say. It is so popular it has had 5,250,280 views since December 15.

The video titled “Cell phone crashing at the airport,” shows Greg sitting next to people on their cell phones and then when they ask a question to the person on their phones Greg answers it, which confuse the public callers.

How about you come to dinner at my house for 6pm? This is one question a woman said on her phone to someone, and Greg replied on his pretend call by saying in a nutshell that’s perfect see you at six then.

Please do comment about the video shown below, thanks.