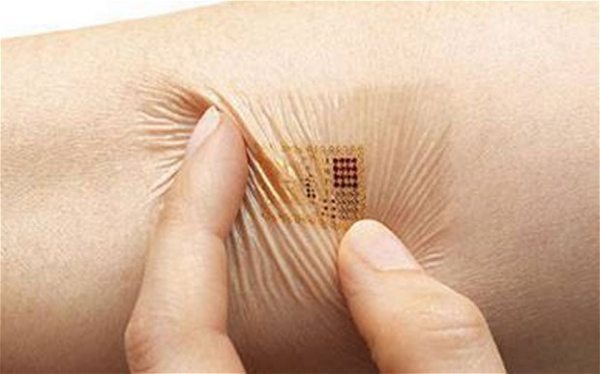 It can be said that crazy and bizarre inventions do bring some fun into our lives, but the two Motorola patents that were filed back in Q4 2013 that relates to electronic skin tattoos raises concerns and questions.

No one is for sure when this type of technology will hit the market, but the patents suggest it will release in the future. Motorola who are owned by Google have applied for a brand new microphone tattoo patent, which is basically an electronic sticker tattoo that can be applied to a person’s throat that can pick up sounds of their voice.

The tattoo is said to have a built-in microphone that can connect wirelessly to a smartphone, it also has a transceiver that enables wireless communication with the user’s smartphone. All sounds a little too futuristic and many will love the technology, but there is cause for concern.

The good thing about this new electronic tattoo is that it will be welcomed in loud environments such as football games, restaurants, on public transport etc thanks to the tech within allowing it to work in varying frequencies of acoustic noise.

Something a little strange in the Motorola patent found by Patently Apple is the mention of “galvanic skin response detector”, this could be as simple as the person wearing the tattoo operating a smartphone wirelessly via Bluetooth or NFC with skin movements using vibrations to operate, but on a whole new scary level it could be used for interrogations, military operations and even as a lie detector.

We do not think for one second this patent is for a permanent tattoo, it will probably be a removable sticker that can be applied when needed. For the full in-depth look into the new Motorola electronic skin tattoo patent please visit Patently Apple.

How do you think the new Motorola electronic skin tattoo will be used?