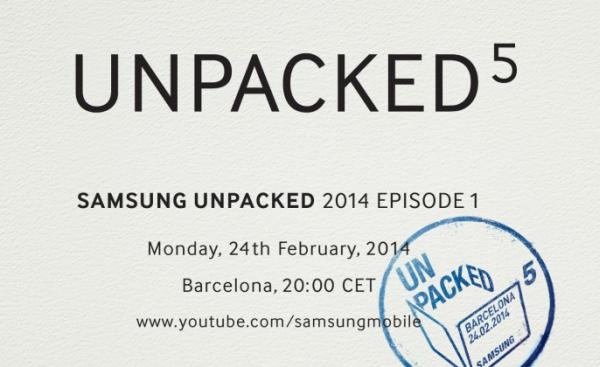 In the next few weeks the Android platform could be about to be treated to some new flagship smartphones from a variety of companies, and now the Samsung Galaxy S5 launch date looks set for an Unpacked event at MWC 2014.

The rumour mill has gone into overdrive in the last few weeks concerning the specifications and design of the Samsung Galaxy S5, but all these rumours could be soon put to bed with the device likely to be officially unveiled at the Samsung Unpacked 2014 Episode 1 event.

Samsung has revealed that it will be holding its first Unpacked event for this year on February 24th in Barcelona, Spain at 8 p.m. local time, and just like its previous Unpacked events this one will be streamed live via the company’s YouTube channel for those that can’t make it to the show.

While not confirming the presence of the Samsung Galaxy S5 the invite that you can see on this page features a couple of conspicuous 5s, so surely the event will be unveiling the company’s first flagship smartphone of 2014.

Last year the company sent out invites for the current model during the MWC 2013 event asking us if we were “ready 4 the show”, with the unveiling taking place in March. It looks like that this year the Galaxy S5 could be coming a little earlier which could be a move to see off the increasing competition.

There has been loads of speculation about the specs for the Galaxy S5 which we have been covering over the last few months with a number of different articles that can be seen here.

Are you going to upgrade to the Samsung Galaxy S5?