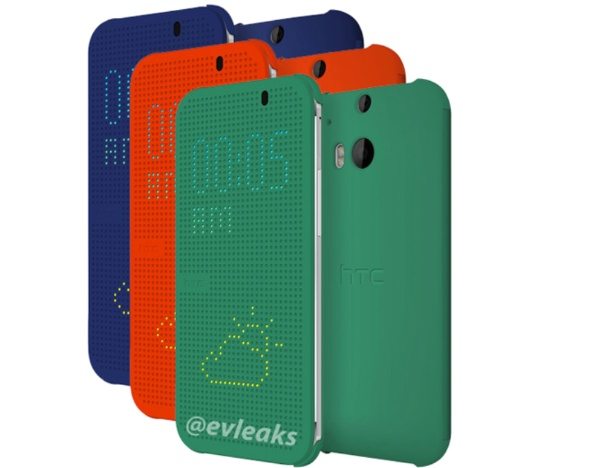 Anticipation is building ahead of the March 25th event where we will see the unveiling of the HTC One successor, currently dubbed the HTC M8 or All New One. This smartphone has been subject to a copious amount of leaks, and only yesterday we saw a leaked image purporting to be a flip cover in black for the device. Now one of the most prolific and reliable leakers out there has posted a further image of the flip covers in various color choices.

This accessory looks cool and has a neat idea that’s rather different to the usual cases or covers. This enables small holes that enable light from the touchscreen of the handset within, to show info such as the weather and time as an LED-like display. It’s a useful way of being able to quickly see often-used information without having to open the cover or have a window cutout.

The flip cover price hasn’t been revealed yet but the new colors revealed are green, orange, and blue. We’ll keep readers posted with more on the HTC One flagship follow-up as we hear it. Are you waiting for the HTC M8 to hit the shelves?