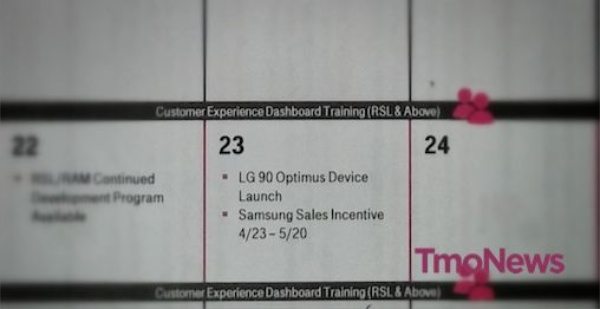 We first passed on news of the mid-range LG L90 smartphone back in February, and if you’re in the US you may be interested to know that this handset is to be offered by T-Mobile. Press renders of the phone for the carrier have already leaked and now we have news on when you will be able to get hold of it.

The LG L90 is the best of the new L Series III lineup and a leaked T-Mobile internal document has revealed a release date on the carrier of April 23rd. We have no way of knowing if this document is authentic, so remember that this is not confirmed. Nevertheless, if this is the real deal then there’s not too much longer to wait. There’s no news on the price yet but this is meant to be an affordable handset.

Key specs include a 1.2GHz quad-core processor, 4.7-inch IPS display with resolution of 940 x 560, 1GB of RAM, and 8GB of internal storage. It runs the Android 4.4 KitKat operating system. Hopefully it won’t be too much longer until T-Mobile makes an official announcement. Have you any interest in buying the LG L90?

One thought on “LG L90 T-Mobile US release leaked”