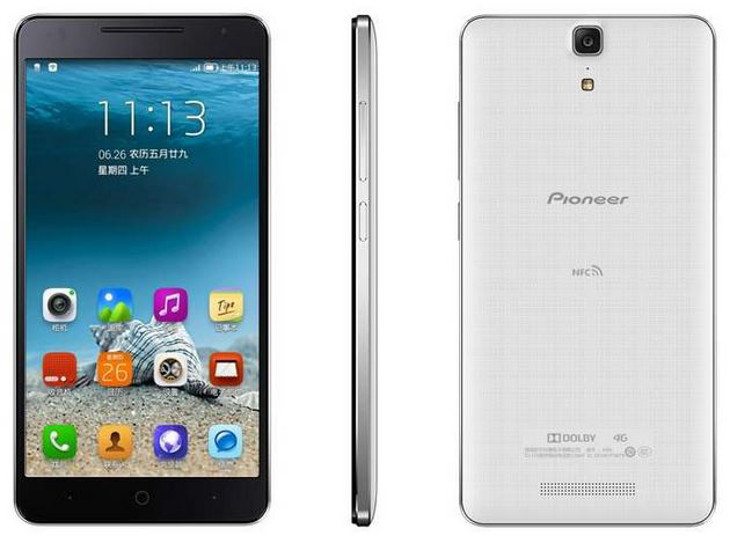 Pioneer isn’t a name you normally associate with smartphones, but that’s exactly what we’re going to do today as the company has just announced the Pioneer K88L smartphone.

The Pioneer K88L smartphone is the company’s first 4G ready handset, and it’s a pretty slick looking smartphone to boot. The Pioneer K88L specs show a 5.5-inch IPS display with a resolution of 1280 x 720. Under that slab of glass, you’ll find a MediaTek (MT6592) chip clocked at 1.7GHz, 8GB of internal storage and 1GB of RAM. The device is nothing to scoff at and it runs KitKat 4.4, but it’s definitely mid-range under the hood.

The rest of the Pioneer K88L specs are actually an improvement as the rear camera is a more than respectable 13MP CMOS sensor while the front-facing camera is 5MP. You’ll get all the usual connectivity options as well with Wi-Fi, Bluetooth 4.0, and NFC with the added bonus of 4G LTE. A 2,500mAh battery will keep the lights on, and as its Pioneer, you can look forward to Dolby Mobile tech to assist with the sounds. The K88L “appears” to have a metal build as well, but looks can be deceiving so we’ll have to get an official confirmation on that.

The Pioneer K88L is a pleasant surprise in a world full of cookie-cutter handsets. It has a nice design, and while the guts aren’t impressive, the cameras and display help make up for that. Unfortunately, pricing and availability haven’t been revealed, so we’re not sure if it will be a bargain just yet or if it will be sold abroad.

Would you like to see the Pioneer K88L come to your neck of the woods if the price is right?