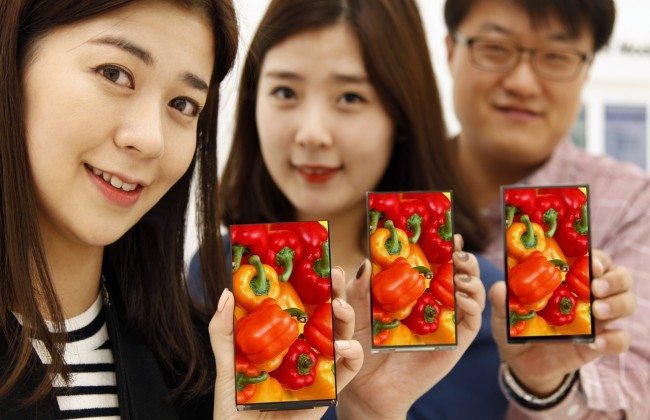 LG has declared war on smartphone screen bezels, and apparently is winning. The LG G2 of 2013 impressed everyone with its smaller-than-the-competition bezels, and this year’s G3 took that one step further, receiving great feedback (but not only because of the reduced size of the bezels). According to the latest press release coming out of the Display division of the South Korean electronics manufacturer, LG has developed a display which allows the company to call it the “world’s narrowest” bezel.

We’re not looking at a Quad HD screen here, like you’d think and expect (LG equipped the G3 with a QHD display), but instead we’re seeing a panel that has FHD resolution, which is Full HD, at 1920 by 1080 pixels. The unit measures 5.3-inches in diagonal and the 0.7mm bezels allow LG to brag about the “world’s narrowest bezel”.

“With the growing trend for large screen smartphones, customer demand for displays with a narrow bezel is increasing, because it enables users to enjoy the maximum use of screen area without compromising excellent grip and design.Â With this innovative product having many advantages, ranging from its narrow 0.7mm bezel and high resolution picture quality to its slim design and touch-embedded solutions, LG Display will continue to lead the growing market for large screen smartphones, meeting the expectations of customers and users by enhancing the quality of devices“,Â said Byeong-koo Kim, Vice President and Head of IT/Mobile Development Group at LG Display.

The official press release compares the 0.7mm thickness of the bezels to the thickness of a credit card, which is actually thicker, at 0.8mm. In order to achieve that, LG relies on two technologies:Â “Neo Edge” module processing technology and the world’s first “Advanced In-Cell Touch (AIT)” technology. What does it all mean? Well, the official wording explains: “LG Display’s Neo Edge technology uses an adhesive instead of double-sided tape to attach and completely seal the total area and edges of the panel’s circuit board and backlight unit. Because there is no plastic guide panel to attach the panel and backlight, the Neo Edge technology helps achieve minimal bezel width, while blocking light leakage and being waterproof and dustproof.”

Mass production for the new display will start in November, and the first region to get it will be China, where apparently there’s a real demand for large screened smartphones.

You can grab more details at the source link below.