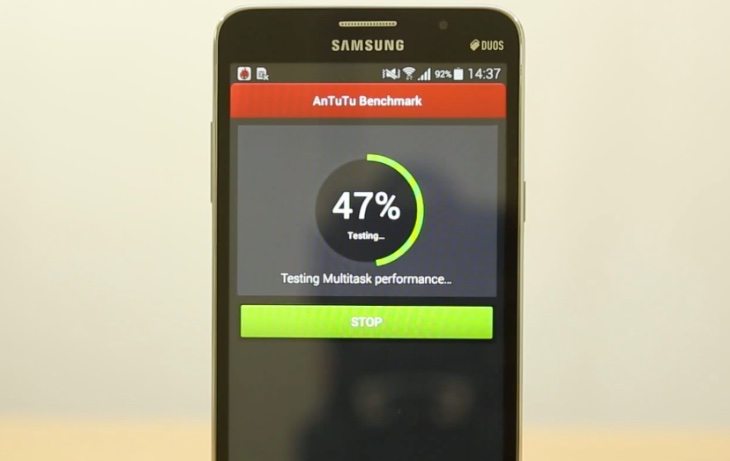 The Samsung Galaxy Mega 2 is a recent arrival to the phablet scene, releasing back in August for some regions. It has also recently launched in India and is aimed at the mid-range sector of the market. If you like to check out benchmark testing of a new smartphone before you buy, you might be interested in a video we’re sharing today of a Samsung Galaxy Mega 2 benchmark roundup and results.

We always expect flagship devices to score well in benchmarking, but it can sometimes be just as interesting to see what some of the more affordable phones can achieve in this respect. The Galaxy Mega 2 has a 1.2GHz Snapdragon 410 quad-core processor, Adreno 330 graphics, and 1.5GB of RAM, so let’s see what it can do.

The YouTube video that we’ve embedded beneath this article comes from Fone Arena who ran the phone through several different benchmark tests. The tests involved are Quadrant, AnTuTu 4, Vellamo, Linpack, Nenamark, GFXBench, Basemark X, and Basemark OS II, and you’ll see each test being conducted followed by the results.

After each test result you’ll then see a chart comparing the score achieved by the Galaxy Mega 2 against many other phones (example shown above). Just a few of these are the Moto G 2nd gen, Xiaomi Redmi 1S, Asus Zenfone 5, Micromax Canvas A1, and Xolo Q2100. It’s fair to say that it’s a pretty mixed picture as far as the results are concerned, with the Galaxy Mega 2 doing fairly well in some benchmarks but much lower in others.

When you’ve taken a look at the video below it would be good to receive your comments. What do you think about the performance of the Samsung Galaxy Mega 2 in this benchmarking?