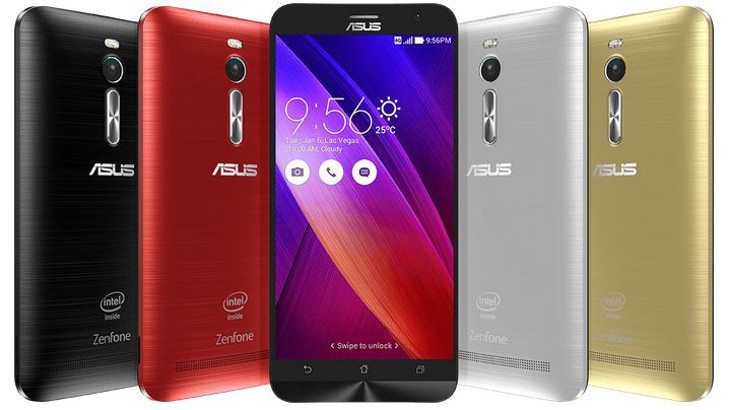 We knew Asus was going to unleash several products today at CES 2015, but we didn’t anticipate how many. Tablets and hybrids were on display along with a couple of new smartphones, and it’s the latter we’re going to take a look at. The Zenfone 2 is now official, and it is going to be a very popular handset with a whole lot of RAM.

The Asus Zenfone 2 is a phablet-sized device with a 5.5-inch FHD display and a screen to body ratio of 72%. The bezels aren’t as slim as those on the LG G3 or Sharp Aquos, but it’s a good looking handset when viewed from the front. On the backside, it seems they borrowed a little something from LG with their new volume rocker.

Looks aside, the Asus Zenfone 2 specs show it has plenty of pop thanks to a 64-bit 2.3GHz Intel Atom SoC and the aforementioned 2GB or 4GB of RAM. The rear camera is listed as a 13MP sensor with a Real Tone LED flash while the front-facing selfie snapper is 5MP. The dual-SIM Asus Zenfone 2 will sip its power from a 3,000mAh battery and it will run Android 5.0 with ZenUI on top.

Buying a phone with 4GB of RAM is exciting, but not nearly as exciting as the Asus Zenfone 2 price. The 2GB model will go for $199 while the 4GB edition “could” come in around $250 or so. If true, expect the Zenfone 2 to be one of the more popular handsets of the year when it arrives in March.

Will you pick up the Asus Zenfone 2 if the price is right?