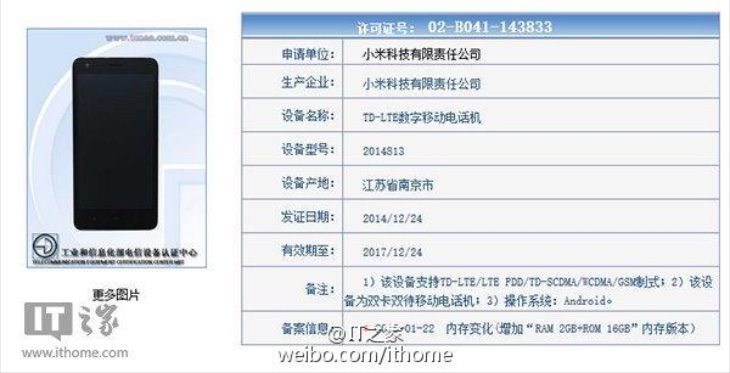 The Xiaomi Redmi 2 was only announced this month and is likely to be another success in the company’s lineup. This is an affordable smartphone and as it supports both LTE connectivity and dual SIM it will have a lot of appeal to buyers. Now a Xiaomi Redmi 2 upgrade with some specs changes is already being reported to add something further to the mix.

The Redmi 2 (aka Hongmi 2) has already released in China and will be heading to further world regions. It follows on from hits such as the Redmi 1S and Redmi Note and is priced at CNY 699. That’s equal to around $112, Â£73 or Rs. 7,100 although pricing is likely to vary according to market. Now there has been a sighting of an improved edition that has surfaced via the TENAA certification process.

The newer Redmi 2 version has many similarities to the standard model but has two notable differences. The current Redmi 2 has 1GB of RAM but the newer upgraded version has 2GB of RAM. Also the present model has 8GB of internal storage and the upcoming model has 16GB. Both of these are changes that will be appreciated by plenty of buyers.

Other than that the handset looks as though it will have the same Snapdragon 410 64-bit quad-core processor, 4.7-inch display with resolution of 1280 x 720, 8-megapixel rear camera equipped with LED flash, and 2-megapixel front-facing unit. We imagine that it will also release running Android 4.4.4 KitKat with Xiaomi’s MIUI 6.0.

There’s no news yet on when this upgraded Redmi 2 will hit availability, but as it has already passed through TENAA for certification it shouldn’t be too much longer until we hear more. In the meantime if you want to check out more on the existing Redmi 2 you can see our articles on it, including comparisons with the Micromax Yu Yureka, Samsung Galaxy Core Prime and more from this page.

How do you feel about this reported newer version of the Xiaomi Redmi 2 and its improvements? Will you buy this smartphone if it releases in your region? Do let us know with your comments.