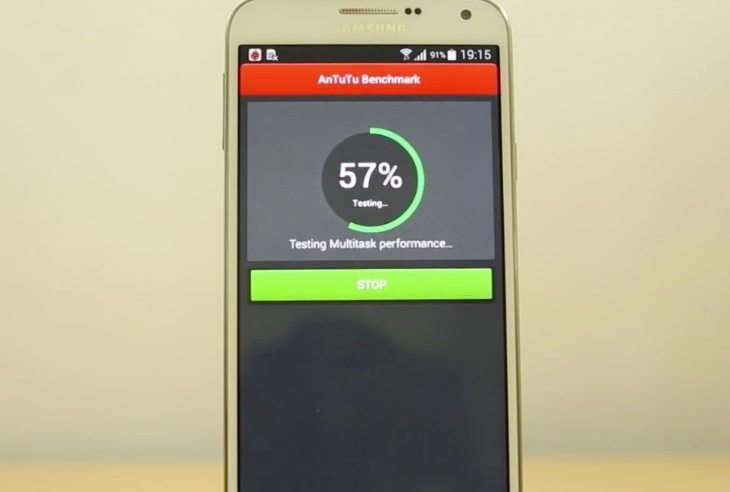 The Samsung Galaxy E7 smartphone was recently announced and it will be sold in various world regions in single SIM and dual SIM variants. If you’re thinking of purchasing this device you may be interested in a Samsung Galaxy E7 gaming review and also a benchmarks comparison that we are sharing today.

Key specs of the Galaxy E7 include a 1.2GHz Snapdragon 410 quad-core CPU, Adreno 306 graphics, a 5.5-inch display with 1280 x 720 resolution, 2GB of RAM, and 16GB of internal memory (expandable). It’s equipped with a 13-megapixel rear camera, a 5-megapixel front-facing unit, and a 2950 mAh battery, and it runs Android 4.4.4 KitKat. We recently showed an unboxing of the Galaxy E7, and below this article we’ve embedded a further two videos from Fone Arena showing this handset.

The first YouTube video is a gaming review of the Galaxy E7. It shows a variety of gameplay from games including Asphalt 8, Modern Combat 5, and Grand Theft Auto San Andreas on the handset, and after each clip a score is given for graphics and also performance. For instance, for Asphalt 8 it’s given 4/5 stars for each category. At the conclusion an overall score is awarded for the gaming experience on the E7, but we’ll let you find that out for yourself when you watch the video.

The second YouTube video is Galaxy E7 benchmarks. It shows different benchmark tests being conducted on the phone including Quadrant, AnTuTu 4, Vellamo, Linpack, Nenamark 2, GFX Bench, Basemark X, and Basemark OS II. After each bout of testing you’ll see the score achieved, followed by a table showing how the E7 performed compared to many other smartphones. Just a few of these are the Xiaomi Redmi 1S, Moto G (2014), Asus Zenfone 5, Samsung Galaxy Mega 2 and more. For a few of the tests the Galaxy E7 is around the top of the table and for others it’s more mid-way.

After checking out the gaming and benchmark reviews below we’d like to get your feedback. Have you decided that you are going to buy the Samsung Galaxy E7? Your comments are always appreciated.