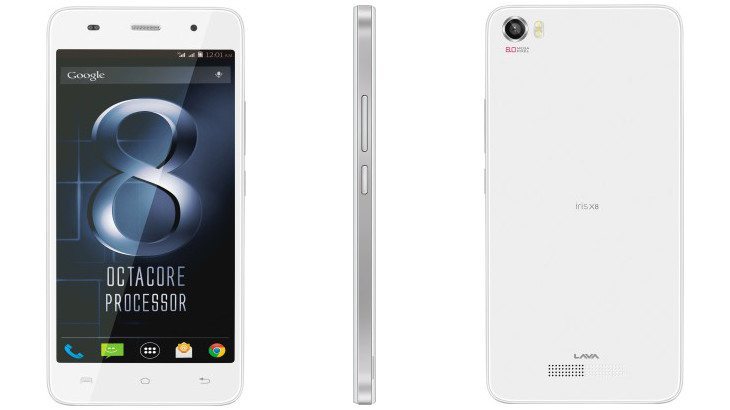 Iris is known for producing budget smartphones in India, and they’ve just unveiled another one. The Lava Iris X8 is the latest midrange handset bound for India, and itÂ has magically appearedÂ on Flipkart today for Rs. 8,999.

Lava has continually cranked out Iris smartphones, and the last one we took a look at was the Lava Iris X1 Grand and it’s smaller sibling the X1 Mini. The Lava Iris X8 offers up a lot more bang for your buck than the previous models, and it’s one of the more impressive handsets the company has produced lately.

The Lava Iris X8 specs show an octa-core MediaTek MT6592M humming along at 1.4GHz, and backed up by 2GB of RAM. As for the storage, you’ll have 32GB to work with which can be expanded further withÂ a microSD card. The device will use a 5-inch IPS panel covered in Dragontrail glass with a resolution of 1,280 x 720, and will sip its power from a 2,500mAh battery.

As you can see from the Lava Iris X8 specs, it isn’t quite what you’d expect from a company whose handsets generally fall in the budget range. There has been no release date set for the Lava Iris X8 at this time, but it’s currently listed on Flipkart in Black or White for Rs. 8,999 so we expect to hear something official soon.