Alcatel 6045 One Touch gets benchmarked with 64-bit SoC 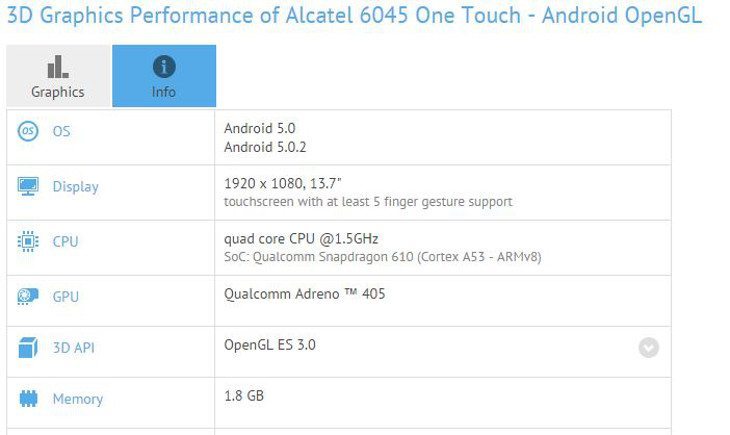 Another week, another new smartphone with a 64-bit chip. The 64-bit mobile age has officially begun, and Alcatel is getting in on the actionÂ with a newÂ handset called the Alcatel 6045 One Touch.

The Alcatel 6045 One Touch has shown up on GFXBench, and it’s brought a new 64-bit chip along for the ride. The specs show a solid handset with plenty of pop, and one possibleÂ error in regards to the display. The device is listed as having a 13.7-inch panel with a resolution of 1,920 x 1,080. Â While it “could” be possible, it’s most likely an error as that’s just too out there.

The rest of the Alcatel 6045 One Touch specs include a speedy 64-bit Snapdragon 610 which is backed by 2GB of RAM. The storage space is listed at 8GB, and you’ll get a 12MP snapper on the back to go along with a 7MP camera on the front. That’s about all we know at the moment aside from the fact the phone was being testing with Android 5.0.2.