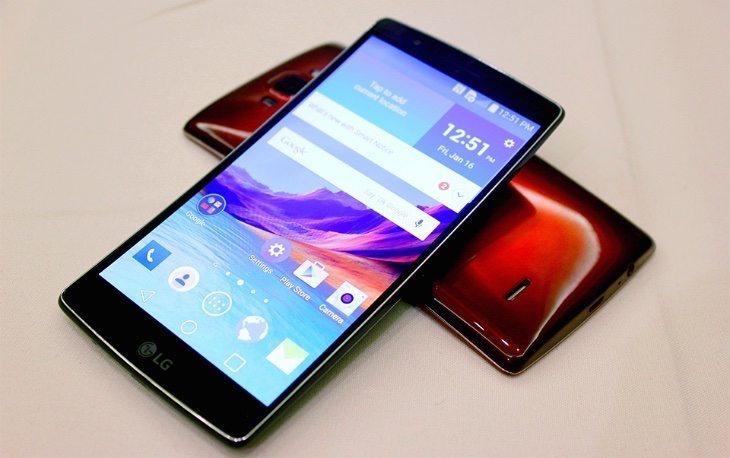 The LG G Flex 2 was made official in February and has been releasing to different markets over the last few months. Now LG has announced that the smartphone can be purchased across India and we have details of the LG G Flex 2 India price and more coming right up. This handset has some very tasty specs but a high price that might make a lot of buyers think twice.

In March it appeared that the G Flex 2 would be available in India later that month so today’s announcement has come a little later than expected. However you should now be able to get your hands on it in India for a price of Rs. 54,990. The curved and stylish phone comes in Platinum Silver or Flamenco Red colors.

Now on to the specs and the G Flex 2 is equipped with a 2GHz Snapdragon 810 64-bit octa-core processor and has a 5.5-inch curved OLED display with Full HD resolution of 1920 x 1080. It has 2GB of RAM, 32GB of internal storage (expandable via microSD), a 3000 mAh battery, and runs the Android 5.0 Lollipop operating system.

Although the price is high this phone has a distinctive appearance and of course a flexible approach that means it can bend from a radius of 400mm to 700mm across its sides, top and bottom edges, front, and back. LG Mobiles India Business Head Deepak Jasrotia said of today’s announcement —

“LG G Flex2 is as beautiful to hold as it is to behold and it represents the perfect combination of beauty and brains. We are pleased to have Anil Kapoor and Nargis Fakhri join us today to share their experience of using this one of its kind smartphone and officially launch it in India. The G Flex2 is a beautiful, high performance and a highly desirable smartphone that offers users both comfort and style.”

Are you willing to pay the price of the LG G Flex 2 to get your hands on it? Maybe you would have thought about purchasing it if the price tag was lower? We always appreciate your comments so do send them in.