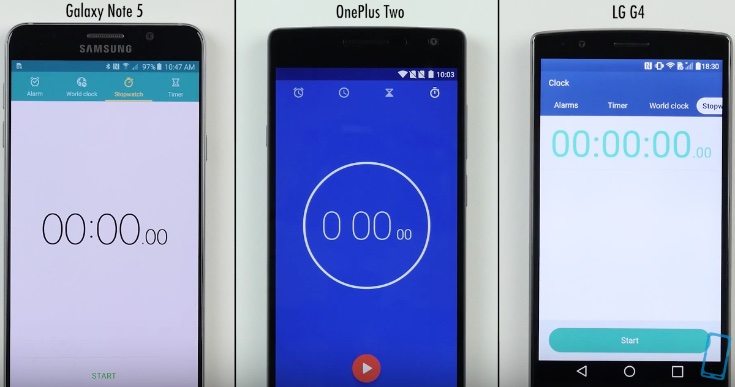 The LG G4 released earlier this year and is now being joined by the much-anticipated Samsung Galaxy Note 5 and OnePlus 2. It’s always interesting to see how top-end devices compare in performance, and informal speed tests can help in this respect. Check out this Galaxy Note 5 vs LG G4 vs OnePlus 2 speed testing and see if the results surprise you.

We should run through some key specs of each so that you can see what they are equipped with. The Samsung Galaxy Note 5 packs an Exynos 7420 octa-core processor, Mali-T760MP9 graphics, and 4GB of RAM. The LG G4 has a Snapdragon 808 hexa-core CPU, Adreno 418 graphics, and 3GB of RAM. The OnePlus 2 is powered by a Snapdragon 810 octa-core processor, with Adreno 430 GPU, and 4GB of RAM. They are all large-screened devices with the LG and OnePlus phone having a 5.5-inch display and the Note 5 on 5.7-inches. Also they all run Android 5.1 Lollipop or Android 5.1.1.

Below this article we’ve embedded a video from YouTube by PhoneBuff showing speed tests on the Galaxy Note 5, LG G4 and OnePlus 2 and a race to the finish. The testing is split into two laps, the first intended to test the processing power of the phones while the second lap focuses on multitasking abilities. This is aimed at providing a better idea of overall performance.

The video shows all three handsets in split screen format so that you can compare speeds as the testing happens, and this begins by opening up system apps on each. The Galaxy Note 5 takes an early lead and completes the first lap in an impressive time of 1 minute and 2 seconds. The LG G4 is a notable distance behind on 1 minute and 21 seconds while the OnePlus 2 staggers in with 1 minute and 26 seconds.

For the second lap regarding multitasking the reviewer makes the salient post that the Note 5 has to reload each app, which could make quite a difference. We’re not going to spoil your enjoyment of the final result after lap 2, but we will say that the time attained by the first and second-placed handsets ends up very close indeed. The time difference for the third-placed phone is longer, although it’s not too far behind.

When you’ve taken a look at the video it would be good to know your thoughts on this speed testing. Are you surprised (or not) by the results attained by the Galaxy Note 5, LG G4, and OnePlus 2?