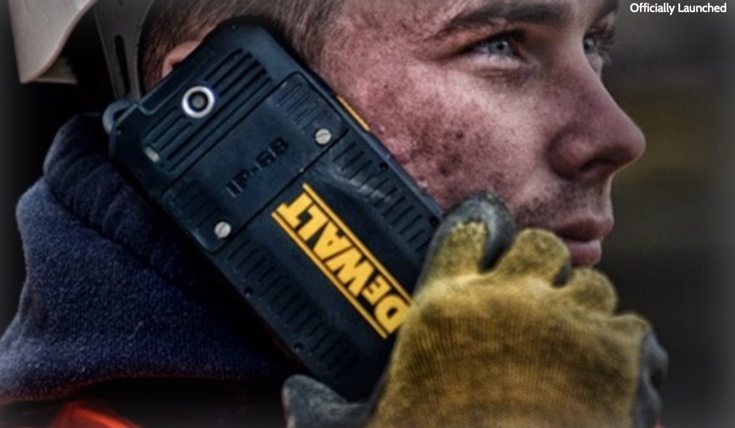 If you work in the construction industry, in other tough conditions, or are simply a very active person, you might have an interest in rugged smartphones built to be durable. A new kid on the block has just been introduced that’s aimed at industry workers, and there’s news on the Dewalt MD501 price for this new rugged smartphone.

Many readers will have heard of power tool company Dewalt, and now the company has unveiled the tough MD501 Android smartphone. The Dewalt MD501 price is Â£379, that equates to around $545, â‚¬482, or Rs. 36,100 and it will be released soon although we don’t yet have a specific date.

Those working in difficult conditions really need a rugged handset, and the Dewalt MD501 is dustproof and waterproof to IP68 certification standards. That means it can withstand being under 2 meters of water for 30 minutes. Extreme weather conditions are another factor to consider, and Dewalt says that the MD501 can be used in temperatures of between -20C to 60C. The phone can also withstand being dropped from a 2-meter height onto a concrete floor.

As far as specifications are concerned the Dewalt MD501 is equipped with a 1.3GHz MediaTek MT6735 quad-core processor. It has a 5-inch display with HD resolution of 1280 x 720 that’s protected by Gorilla Glass 3. The dual SIM handset has 2GB of RAM, 16GB of internal storage, and a 3020 mAh battery with Qi wireless charging. The latter is apparently a first for a rugged smartphone.

The phone has a 13-megapixel rear camera, and there’s a 5-megapixel snapper at the front. Connectivity is catered for with 4G LTE, WiFi, Bluetooth 4.0, GPS/A-GPS/GLONASS, Beidou, NFC, microUSB 2.0, and OTG. The handset measures 156mm x 82mm x 14mm and it weighs 245g.

Hopefully it won’t be too much longer until availability, and in the meantime we’d be interested to receive your comments. Are you in the market for a rugged smartphone? If so, what are your thoughts on the Dewalt MD501?