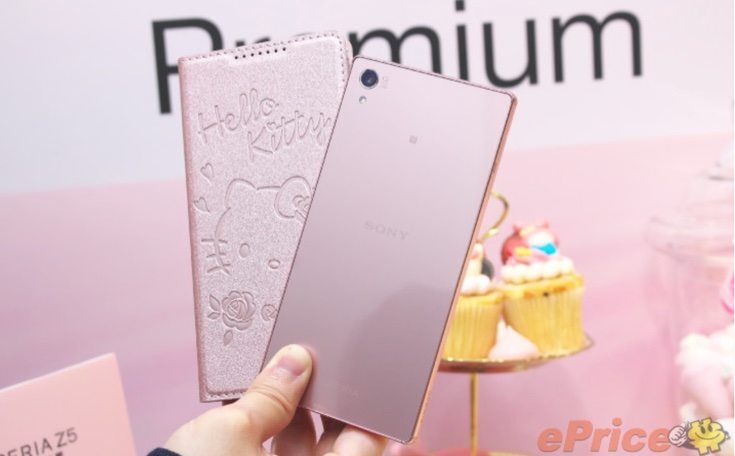 Sony’s Xperia Z5 Premium released towards the end of last year and color options of Black, Chrome, and Gold were first announced. Now there’s further choice, as a Sony Xperia Z5 Premium pink color is arriving on sale for some. However, unless you live in one of the selected markets it may not be readily available.

While stocks last Sony is giving buyers a free Hello Kitty case as a bonus. From May 3rd the Sony Xperia Z5 Premium pink option will also be offered by Chunghwa Telecom, Taiwan’s largest carrier. So far other markets where the pink color of the phone is anticipated include Mainland China and Hong Kong. It’s possible that it may also release in further regions but there’s no further news about this yet.

As a reminder of specs the Xperia Z5 Premium is equipped with a Snapdragon 810 processor, and one of its highlights is a 5.5-inch display with resolution of 3840 x 2160. It has 3GB of RAM, 32GB of internal storage (expandable with microSD), and a 3430 mAh battery. The high-end phone packs a 23-megapixel rear camera with f/2.0 aperture and 4K video capture, and there’s a 5-megapixel front-facing shooter with 1080p video capture and 25mm wide-angle lens.

The phone features a fingerprint sensor and is dust and water-resistant to IP65/68 standards. It launched on the Android 5.1.1 Lollipop OS but is now upgradable to Android 6.0 Marshmallow. Are you hoping that availability of the Sony Xperia Z5 Premium pink model spreads to further markets?