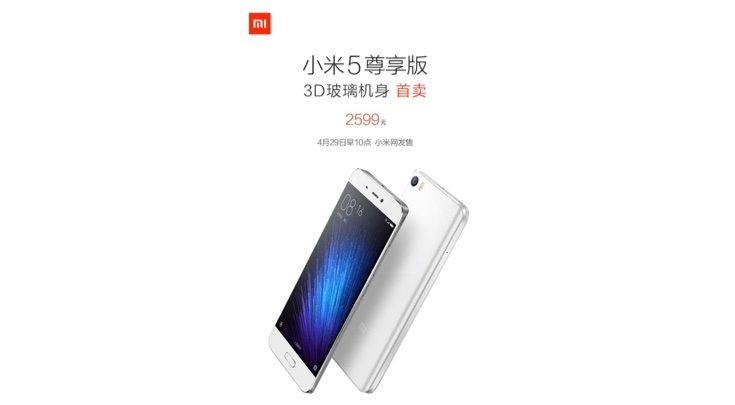 Xiaomi’s Mi 5 Pro was launched in February with a 3D ceramic body. Now there’s an alternative as a Xiaomi Mi 5 Pro white 3D glass body model has just officially launched at a slightly lower price. The new white version of the smartphone will be available from Xiaomi’s official website from April 29, which is just around the corner.

Internal storage for the phone is 128GB and it packs a 3000 mAh battery that’s claimed to deliver up to 250 hours on standby and up to 10 hours of talk time. The phone has a 16-megapixel rear camera with Sony Exmor IMX298 sensor, PDAF, dual-tone LED flash, and 4-Axis OIS, plus a 4-megapixel front-facing snapper. It’s a dual SIM dual standby handset and features a fingerprint sensor incorporated into the Home button.

The Xiaomi Mi 5 Pro runs the Android 6.0 Marshmallow OS skinned with Xiaomi’s MIUI 7. The phone measures 144.5mm x 69.2mm x 7.25mm and it weighs in at 129g. It’s reported that the 3D glass model can be more reliably produced than the ceramic model, enabling shipments to be met more easily.

The new 3D glass white version will be up for grabs on Xiaomi’s website from 10am (Chinese Standard Time) on April 29. Are you a potential buyer of this new slightly cheaper version of the phone?