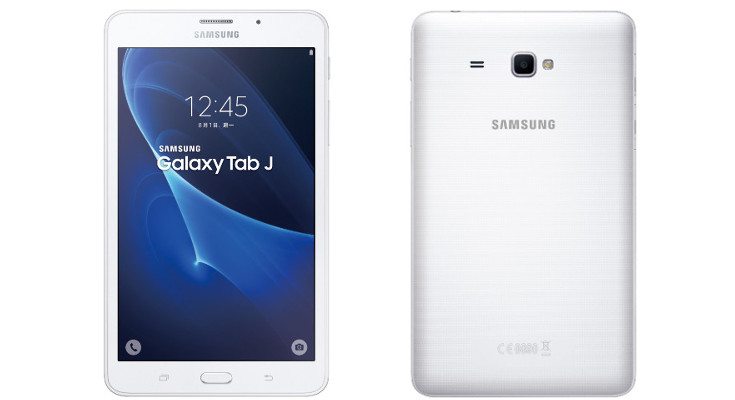 Samsung doesn’t release nearly as many tablets as they do slates, but they still manage to surprise us with a few new additions each year. The company generally offers up something for everyone from the high-end tablets to more affordable tech, which is where the Samsung Galaxy Tab J tablet fits in. It’s a 7-inch slate geared towards the budget crowd, but not exactly what we would call affordable.

The Samsung Galaxy Tab J tablet is of average size measuring 108.8mm x 186.9mm x 8.7mm with a weight of 289grams. The display clocks in at 7-inches with a resolution of 1,280 x 800. Beneath that slab of glass, you will find a 1.5Ghz quad-core chip of unknown origins and 1.5GB of RAM. The storage is listed at 8GB, but expandable through the usual means.

Slates aren’t known for having great cameras, so it’s somewhat surprising to find an 8MP sensor on the back of the Samsung Galaxy Tab J tablet. That snapper also has a flash although the front-facing sensor is about what you would expect at 2MP.

The Tab J basically looks like a giant phone, and for good reason, as it has a SIM slot for voice-calling capabilities. Other features include Bluetooth 4.0 LE, Wi-Fi b/g/n, A-GPS, an FM radio, and a 4,000mAh battery. The slate is listed as running Android 5.1.1 along with Sammy’s heavy dose of preinstalled software.

Samsung hasn’t given the Samsung Galaxy Tab J tablet a proper release date just yet, but it is expected to make its debut in Taiwan next month. The price tag shakes out to around $190 in the region and the slate will be available in Gold and White.