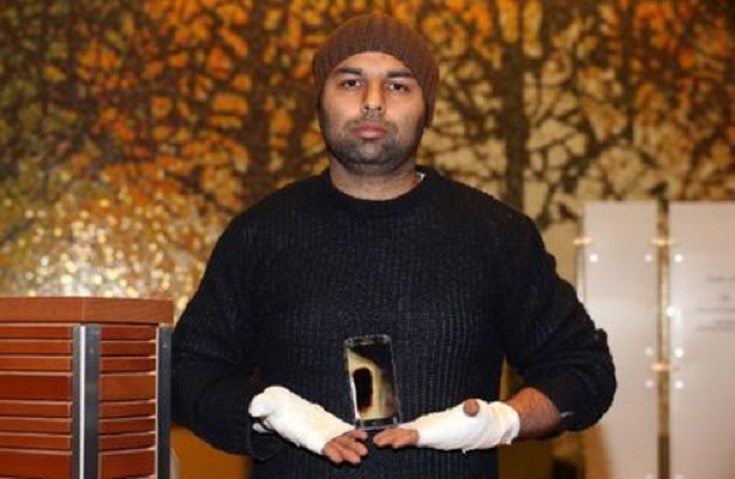 I hate to be the bearer of bad news for Samsung aficionados, but it’s better to be safe than sorry, as a Canadian guy just discovered when his 6 months old Samsung Galaxy S7 exploded in his hands. The victim is a 34 years old Canadian named Amarjit Mann, an auto-mechanic and the smartphone exploded while he was driving his car on Sunday provoking 2nd and 3rd degree burns to his hands.

At the time of the explosion, Amarjit felt a warmness inside of his pocket and fortunately he was able to take the droid out in time and throw it out of the car (he was driving with the windows open), but not before suffering serious burns, as the Galaxy S7 was reportedly stuck to his hand. As far as horror stories go, this one is pretty good, don’t you think? Your smartphone trying to kill you while driving, you can make a movie about that.

Amarjit Mann now calls the S7 “a bomb you can carry”, which means he still has a sense of humor despite the nasty incident. Fortunately, the injured driver was able to reach a friend’s house, from where he was taken to the hospital, as the wounds were serious. To quote Amarjit:

“I took it out and had it in my hands and it exploded right away. When you see smoke, I was shocked. You cannot expect this thing. It was like a nightmare.”

The carrier from which the defective Samsung Galaxy S7 was purchased told Amarjit Mann to contact Samsung directly. The injured driver paid almost $1000 for the S7 and now he threatens to sue the Korean tech giant for damages related to loss of wages and injuries. The victim was told that his wounds will require up to nine days to heal. Truth be told, I’d hate to be in Samsung’s shoes right now, what’s next after the Note 7 and millions of washing machines exploding? TV Sets?