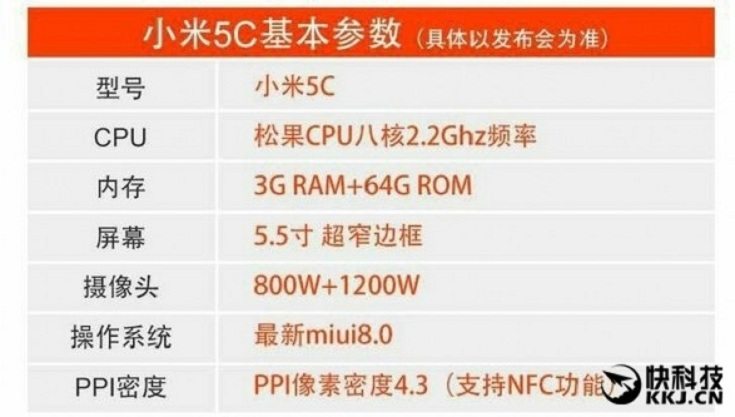 Yesterday we told you about the price of the upcoming Xiaomi Mi 5c, the future working horse of the Chinese based company and today ‘s news is even better, as we already have the tech specs leaked. According to yesterday’s intel, the Xiaomi Mi 5c will be sold initially for $144  but now we know exactly what we’ll be getting for that kind of money.

As I already suspected, the Xiaomi Mi 5c will be a solid mid-ranged droid playing in the best bang for the buck category, boasting impressive specs for its price tag. Despite being a lower end alternative in the Mi 5 line, according to its specs sheet leaked today in mainland China, this cheap droid runs on an octa core (eight cores) system on chip architecture with the CPUs clocked at 2.2 GHz and it has 3 GB of RAM/64 GB of native storage capacity.

The display is a 5.5” wide variety with narrow bezels, which seems to become the new normal even in consumer-grade devices. The Xiaomi Mi 5c comes with NFC support and has two cameras, a 12 megapixels main snapper and an 8 megapixels secondary for selfies and video calling. The smartphone will most probably run on Android Marshmallow 6.0 out of the box enhanced by the company’s proprietary MIUI 8 skin. The CPUs are said to be Cortex A53 varieties whilst word on the Xiaomi street is that the Mi 5c runs on an in-house made chip-set, but I find that hard to believe.

According to previous leaks, the Xiaomi Mi 5c has a finger print scanner on the front and it features the popular 2.5D glass design. The smartphone is expected to be revealed officially during a special event on November 30th, which is the exact same day when Meizu is set to announce their new Flyme OS 6 and maybe a new smartphone.