Alcatel Idol 5S gets listed with 3GB of RAM on Geekbench 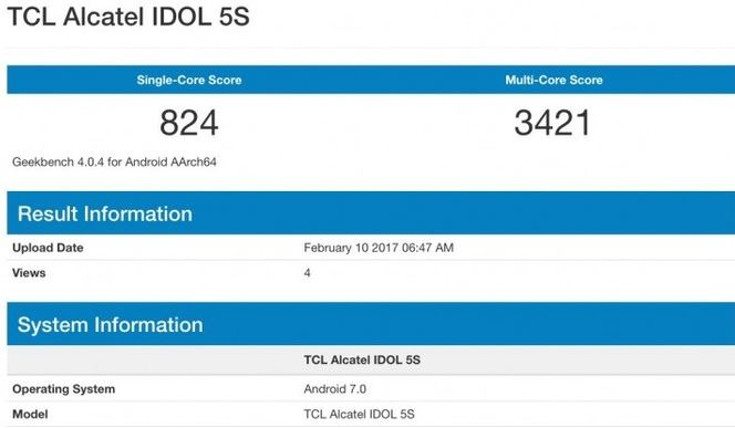 We are going to be swimming in new smartphones when MWC 2017 kicks off. We’re not sure if the Alcatel Idol 5S will make the trip, but the handset has been spotted today ahead of a formal announcement.

Geekbench is where you’ll find the listing of for the unannounced Alcatel Idol 5S. We haven’t heard much from the company since the calendar flipped to 2017, but that appears to be changing soon. While nothing is confirmed, the Alcatel Idol 5S has strolled through Geekbench leaving a trail of specifications in its wake.

The Alcatel Idol 5S will have the same amount of RAM as the Idol 4S, so you’ll get 3GB straight out of the box. While that may lead one to believe we’ll see an incremental upgrade, the processor has gone from the Snapdragon 652 to the Helio P20. The OS is shown as Android 7.0 but unfortunately, that’s all we know at the moment. That said, we would expect a similar display and cameras so the Idol 4S is a good starting point.

If you are looking to pick up a new smartphone in the next few months, the choices are going to be vast. LG, Samsung, HTC and Sony will all have new devices along with companies like Alcatel. While the latter won’t be able to go toe-to-toe with the big boys, they will offer up similar affordable solutions. Stay tuned, and we’ll have more on the Alcatel Idol 5S as more details surface.