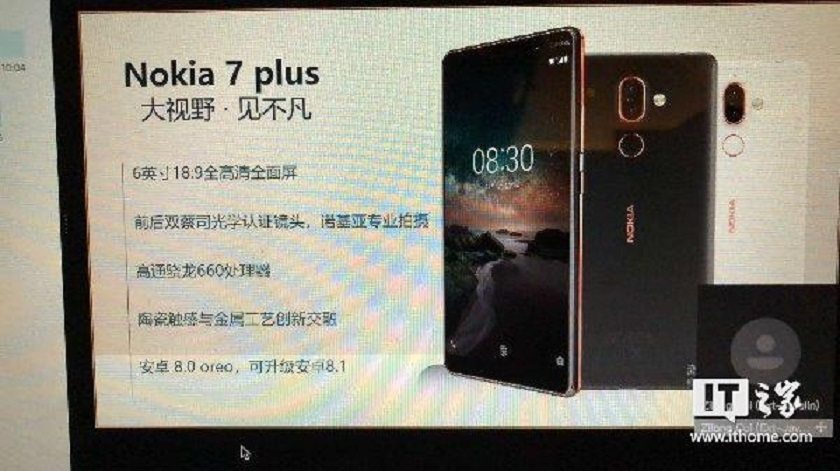 I’ve mentioned many times in my previous articles about the comeback Nokia made. HMD Global did an excellent job to the brand and it is slowly getting it back to its glory days. There are many new devices that should be revealed at the upcoming MWC in Barcelona. Today, we have some details about the Nokia 7 Plus. And from the looks of it, we’re definitely going to see another great device. Let’s see them!

As we can see from the leaked images, we can see that finally Nokia is jumping on the tall screen wagon. The 6-inch display features an 18:9 aspect ratio, which is the common value for many smartphones that were released last year. This will be Nokia’s first device with a tall screen, suggesting that they’re not closing their eyes on the trends. As a result, the taller screen means that the bezels are smaller, with the fingerprint sensor being moved to the back. Speaking of the back, you will find the camera setup in the traditional upper-middle spot. The fingerprint sensor is placed right under them, with the Nokia logo completing the back look.

You can already suggest from the name itself that the Nokia 7 Plus will be a beefed-up version from the original device. And looking at the leaked presentation slides, we can expect a powerful device performance-wise. The device will feature the Snapdragon 660 chipset, an excellent choice that will handle any task you throw at it. It will be accompanied by 4GB of RAM, which should be more than enough even for the biggest multitaskers. You’re also going to get 64GB of internal storage, which should be even more upgradeable with a MicroSD card. Unfortunately, there are no details about the battery in the leaks. But, knowing that the regular Nokia 7 had a 3000mAh one, we expect the Plus version to have more than that.

Going forward to the camera, we can see that the Nokia 7 Plus will pack a dual lens setup on the back. They will pack 12MP and 13MP, with the second one being a monochrome one most likely. On the front, we will find a single, 16MP lens featuring the Tetracell technology. That feature will improve your low-light shots greatly, so selfie lovers would love this novelty. Also, all lenses are believed to be developed by Zeiss. HMD Global did say that they will try to bring back all other subsidiary brands that Nokia was most known for. Therefore, Zeiss is the first of the bunch.

On the inside, the Nokia 7 Plus will feature Android Oreo out of the box. We’re not going to see any custom skin or additional bloatware in it, as in their other devices. That proves that the company is continuing to deliver on their promise, which is great news for many stock Android fans around the world.

The device is expected to be revealed at MWC 2018 at the end of this month, with a release in March. Therefore, we’re expecting for China to be the first country to be launched.

So, what do you think of the rumors for the Nokia 7 Plus? Share your opinions in the comments below.