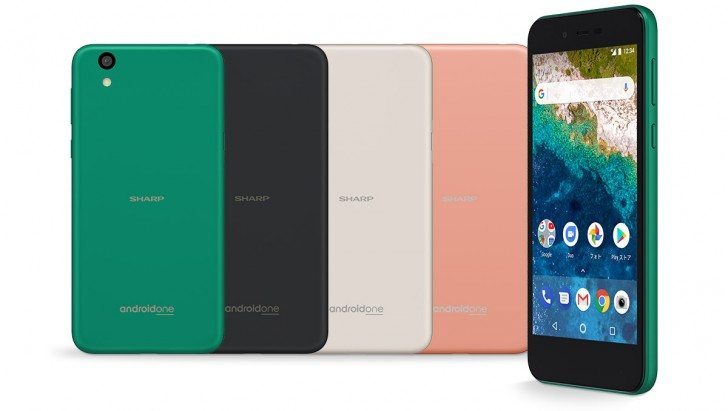 Sharp is probably not the name you see on a smartphone, but they are positioned well in some Asian markets. The Japanese company is doing extremely well at home, and they’re constantly releasing new devices under their name. In the west, they became famous with the Sharp Aquos, a smartphone that had its top bezel almost removed. Since then, we’ve seen many other devices, and now they’re back again with the Sharp Android One S3. It’s the company’s newest budget device under the Android One program, so let’s see all of the details!

Starting with the design, the Sharp Android One S3 has a colorful design. It reminds me of the iPhone 5c in a way, namely due to those colors. Let’s start with the front of the device, where you will find the 5” 1080p IGZO display. The company is promising clear, vivid images thanks to their S-Pure LED backlight, but we would have to see it and conclude that for ourselves. Sadly, you won’t find the famous 18:9 aspect ratio as many other devices today. And we’re saying that mostly because of the large bezels this device has, without anything on them. Nevertheless, it is a budget device, so we shouldn’t have our expectations high. On the back, you will find the camera setup on the top corner, with the company’s logo in the middle.

Performance wise, the Sharp Android One S3 is packing decent hardware for the low price. The Snapdragon 430 chipset is a good processor that will handle most of the tasks. Accompanied by the 3GB of RAM, the device is ready to take anything you throw at it. Speaking of the memory, the device will have 32GB of internal storage. In case that is not enough for you, a MicroSD slot is available. Finish the internal components with the battery, the Sharp Android One S3 will feature a 2700mAh battery. Considering the small display and components, it should last you through a full day of use.

Switching to the cameras, the Sharp Android One S3 is not going to jump on the dual camera train. Instead, you’re getting a single 13MP main camera on the back, with a 5MP one on the front. The pictures should come out nice and smooth, with decent sharpness. But, don’t expect anything special, since this is a budget device. The front camera should satisfy the casual selfie lovers, giving you decent pictures for your favorite social media platforms.

The main feature of the Sharp Android One S3 is in the itself – Android One. That means that you’d be getting a stock version of Android Oreo, without any custom skins or bloatware on it. As a plus, you’re guaranteed minimum two years of security and software updates, so you shouldn’t worry about that. It’s nice to see companies embracing this program and implementing it in their devices. Some of the other notable features is the dust and water resistance, which in my opinion should be implemented in all devices.

The Sharp Android One S3 is currently available in Japan for around $300. There is still no word if it will spread to the western markets, but we will update this article in case it does.

So, what do you think of the Sharp Android One S3? Share your opinions in the comments below.

One thought on “Sharp Android One S3 announced!”