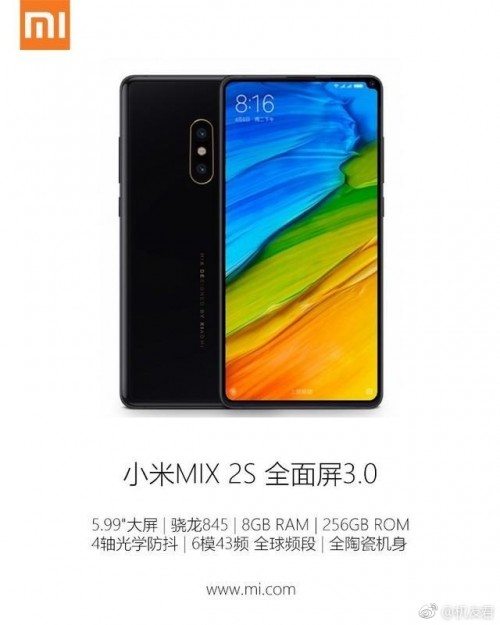 Xiaomi is slowly taking over the western countries. The company is producing great devices for every price range without cutting down on the quality. That is why Xiaomi is currently one of the best brands in the Asia market. They managed to produce many great devices, with the Mi Mix and Mi Mix 2 being one of their most famous ones. These devices started the tall display craze among competitors, giving us more screen to work with. And now, they want to add the Mi Mix 2S to the lineup, an updated version of the original one. Let’s see the details about it.

As with the previous devices, the design of the Mi Mix 2S will be the main attraction of the device. The original Mi Mix was presented as the dream “concept” phone – boasting features and design choices that many other companies lacked. One of the best features was the tall display, filling up most of the front. Well, the Mi Mix 2S will increase that even more. Named as the Full Screen design 3.0, the 5.99” display will further reduce down the bezels of the device. The only limitation is the front camera, which is placed in the top right corner. On the back, the camera setup is placed in the middle, with the branding right under it. As you can see from the image, there is no fingerprint sensor visible. Don’t worry – Xiaomi will place it under the display, the same technology as we saw it on the Vivo one.

Speaking of features, the Mi Mix 2S will be (again) packed with them. Starting with the hardware, you will be getting the best that is available right now. Starting with the chipset, the Mi Mix 2S will feature the Snapdragon 845 processor. Alongside the 8GB of RAM, that combination should satisfy even the most notorious multitaskers and power users. Speaking of storage, the device will have 256GB of internal memory available. There are no details about the battery, but considering the screen, it should range around 4000mAh.

The cameras on the Mi Mix 2S will be top-notch, and you’d be getting one of the best sensors available right now. Starting on the back, the dual 12MP camera setup will be based on the Sony IMX363 sensor. Pictures coming out from that sensor have great color accuracy and great dynamic range. Of course, the software also plays a key role in the camera setup, but that isn’t a common problem from Xiaomi devices. Sadly, there is no information about the front camera, but for all of your selfies, it should be more than enough.

The device will come packed with Android Oreo out of the box, with Xiaomi’s own MIUI skin on top of it. The skin is a key feature when you’re buying a device from the company, and although it looks daunting at first, it packs many useful features.

Unfortunately, there is no information on pricing or release date yet. We’re expecting Xiaomi to announce it at MWC 2018 in Barcelona at the end of this month.

So, what do you think of the rumors about the Xiaomi Mi Mix 2S? Share your opinions in the comments below.