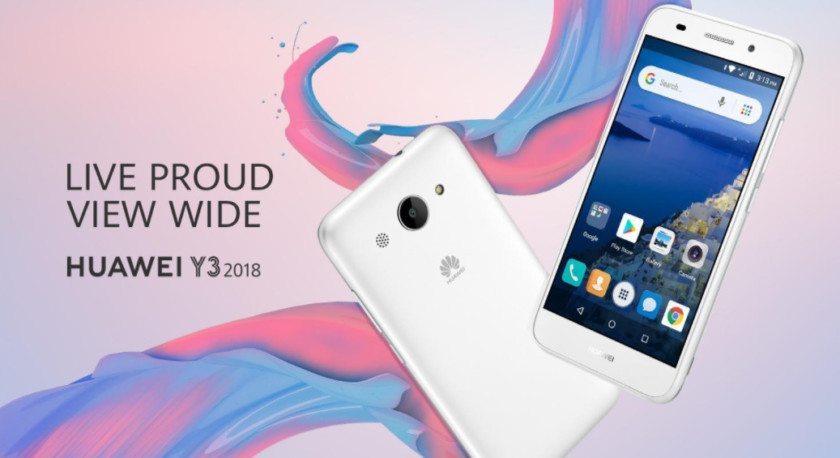 Huawei is the second global smartphone maker in the world, and the company rightfully earned that. Surpassing Apple, the company offers a broad range of smartphones for every budget. Their most recent P20 Pro is a great device that offers high performance and a premium design. Also, it packs in three lenses on the back – and all of them shoot great pictures! But today, we’re going over to the budget side and taking a look at the Huawei Y3 2018. This is the company’s first Android Go smartphone aimed at those that don’t want to break their bank. Let’s begin!

Starting with the design, the Huawei Y3 2018 is not going to impress you a lot. In fact, this is a budget device, so you should tune down your expectations accordingly. The device features a plastic back, a common material on lower-end devices. On the front, you will find the 5” display with 854 x 480 resolution. The side bezels are surprisingly small – pretty incredible considering that it doesn’t feature an 18:9 aspect ratio. Some capacitive buttons would have been nice to use up the bottom bezel space, but again – this is a budget device. Cutting down on costs is expected. Rotating to the back, you will find the single camera lens in the middle, with the flash next to it. The Huawei logo sits proudly in the middle.

On the performance side, again, you’re getting according to the price you’re paying. In the case with the Huawei Y3 2018 and Android Go, those are entry level hardware components. Starting with the chipset, the device features the MediaTek MT6737M quad-core processor. It should handle most basic tasks easily, but don’t except to run CPU intensive apps. Accompanying the processor is the 1GB of RAM, the maximum threshold for Android Go. It should house many basic apps, such as most of the social media ones. Speaking of storage, you’re also getting 8GB of internal storage. We wished that at least this could have been upgraded to 16GB, but you’re stuck with 8. Finally, the 2280mAh battery should easily power all of these components and last you through a full day.

On the camera side, the Huawei Y3 2018 features a single 8MP shooter on the back. It is accompanied by an LED flash, and it should take ok pictures in good lightning conditions. Don’t expect anything in the night, unless you want to see slow moving shadows. The same things apply for the front 2MP shooter also. It is decent for video calls and the occasional selfie, but don’t expect any miracles.

The software is the exciting part of the Huawei Y3 2018, as it packs in Android Go. Google’s stripped-down version of Android is aimed at devices with low performance, especially optimized for them. Users are going to see many of Google’s services in their special Go versions.

Currently, the Huawei Y3 2018 is available in South Africa only. It should easily come through Europe as well, and we will update you when it becomes available. The device is priced at around $80.

So, what are your thoughts on the Huawei Y3 2018? Share them in the comments below!