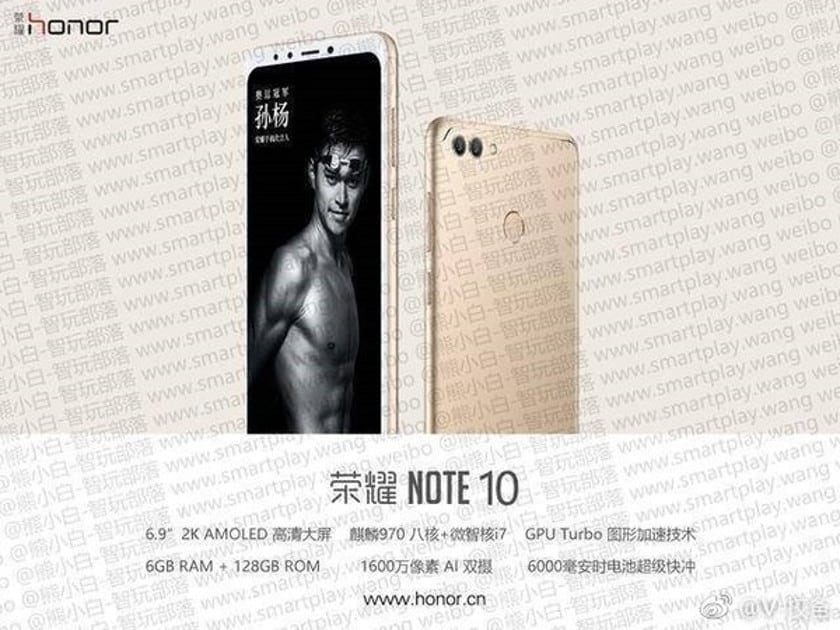 Honor, the subsidiary of China – based Huawei, has gained a lot of popularity across all markets. We’ve seen a bunch of great devices from them for every different budget. The Honor View 10 was and still is one of the best midrange smartphones available on the market. Namely, because it offered powerful hardware and excellent design for a small price. We’ve seen other devices from them too, as the Honor 7A and the Honor 7C. Today, we have some details about their next device – the Honor Note 10. Think of this as the Pro or Plus version of the View 10. Let’s see the rumors!

Starting with the design, the Honor Note 10 shares a lot with other midrange devices in the budget. The device has a nice, aluminum finish with rounded edges that will feel nice and smooth in the hand. On the front, the device is rumored to have a 6.9” AMOLED display with 1440p resolution. This suggests that the device is going to be targeted towards the Mi MAX 2. From the leaked images, we can see that the display will be taller, with small chin and bezels. Rotating to the back, you can notice the camera setup in the top, with the fingerprint sensor in the middle.

Aside from the big display and body, the Honor Note 10 should also be exciting on the inside. The leaks suggest that the device will feature Huawei’s own Kirin 970 chipset. The same chipset is found on the Huawei View 10 Pro, suggesting that this device will be in the higher spectrum of the market. Aside from that, the device is rumored to feature 6GB of RAM and 128GB of internal storage. These specs should be enough future proof and handle all of your needs. The most interesting part though is in the battery department. Namely, the Note 10 could feature a 6000mAh battery. That is pretty huge and justified, considering the big display. However, don’t have high expectations, since these are all rumors.

Switching over to the cameras, the device is rumored to feature a dual camera setup both on the front and on the back. The back cameras will consist at least one 16MP lens with AI capabilities, per the details on the image. Unfortunately, we don’t have any details about the other lenses, but we can be pretty sure that both secondary lenses will be used for portrait mode. The AI capabilities will also be present on the front cameras, as seen in other Huawei smartphones.

Finishing with the software, the device is expected to run Huawei’s EMUI skin, based on Android Oreo 8.1. The skin is heavily modified and looks similar to iOS but packs many useful features. Also, the Kirin chipset is packing a lot of hardware that enables AI, so we’re expecting a lot of those features across the software.

Unfortunately, there is no exact reveal date for the Honor Note 10, but we do know it’s coming. Honor’s president Zhao Ming confirmed this on Weibo, saying that they’ve been working for two years on this device.

So, what are your thoughts on the rumors for the Honor Note 10? Share them in the comments below.