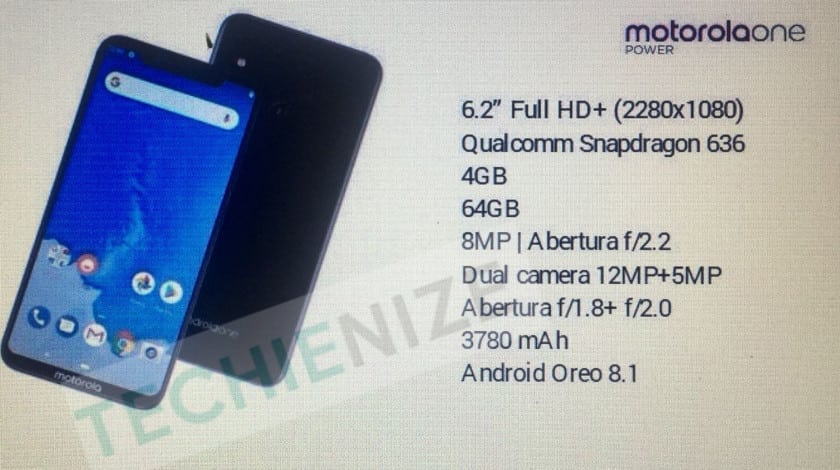 Motorola is in an odd situation in the past period. Most of their new devices are great, and pack in some nice features. But, most of them have a lot of downsides and shortcomings – even some that cannot be found on cheaper devices. A lot of the recent smartphones, like the Moto G have a lot to be desired. And considering the price, the competition is almost always a better choice. Nevertheless, that doesn’t stop Motorola in developing new devices, and today we have some details about one of them. The Motorola One Power is the company’s upcoming device – let’s see the rumors!

Starting with the design, the Motorola One Power is definitely going to follow the trends of this year. And you can see all of them from the rumored image. Going slowly, the front is going to feature a 6.2” display with 2280 x 1080 resolution. It’s going to feature a notch to house the front camera and the sensors. The good thing though is that the bezels are really small, with the bottom chin being reduced to minimal. On the back, you’re going to find the camera setup in the top corner, with the Motorola badge in the middle. We assume that the fingerprint sensor will be placed on the side, as on the recently released Moto Z3 Play. The back panel is made of glass, a pretty common material on midrange and flagship devices.

Performance – wise, from the leaked image we can clearly conclude that the Motorola One Power is clearly a midrange device. Starting with the chipset, the device is going to feature the Snapdragon 636 processor. It is going to be accompanied by 4GB of RAM, which should be more than enough for moderate multitasking needs. Speaking of memory, the 64GB of internal storage should be enough, though we’re not sure yet if it’s going to be expandable. Rounding up the internals, the battery inside the One Power is going to be capped at 3780mAh. It should last you easily through a full day of use.

Moving over to the cameras, the rumors suggest a dual camera setup on the back, with a single shooter on the front. The back setup is going to feature a primary 12MP shooter and a secondary 5MP shooter. So, as with any other dual camera setup, we’re expecting the secondary shooter to be used for Portrait mode. On the front, the device is going to feature a single 8MP shooter with f/2.2 aperture. For all of your selfies, it should be more than enough.

The Motorola One Power could be revealed at an event scheduled in Chicago in the beginning of August.

So, what are your thoughts on the rumors for the Motorola One Power? Share them in the comments below.