Not a good idea! Zealot leaps onto subway tracks to regain iPhone

Ok so here’s how this goes…a guy in New York drops his iPhone down the subway on his way home, the iPhone falls down in the tracks…the guy finally realizes he’s lost his converted iPhone, so backtracks with his mate who eventually spots the fallen iPhone beside the tracks. 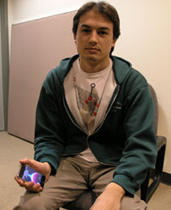 So what does the owner do? Yep you guessed it he jumps down, grabs the iPhone and scrambles back up to safety. Well his iPhone recovered and was still working. So, we know how converted the iPhone is but is it really worth such an open act of stupidity, I mean like isn’t it cheaper to replace an iPhone rather than face the possibility of coming face to face with a train? Or does this guy need an iPhone because he lacks brains?