Vodafone branded ODM v16xx line up for 2008: Should be released in September

Oh boy yet another phone slipped through some ones fingers for the Vodafone line-up for 2008, the phone that has just jumped put of the bag is called the ODM v16xx, good or bad who knows.

Obviously the ODM v16xx will be manufactured by someone and then will have the Vodafone logo branded on it ready for release, the release should be sometime in September “Apparently”.
The ODM v16xx mobile phone will feature goodies like running on Windows Mobile 6.1, GPS and possibly a 1.3 mp camera, QWERTY keyboard and a 320×240 screen. Come on 1.3 MP and it has not even got WiFi or 3G but it is a tri-band handset with EDGE capability phone. 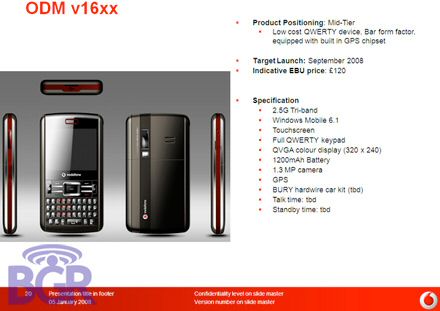 Personally it has been let out of the bag, we say put it straight back in and zip it up, then padlock it, and then finally throw it in the sea.