Kyocera have come up with four new mobile handsets with GSM, and is to initially launch in Latin America, which is where several CDMA providers earlier switched over to GSM networks. 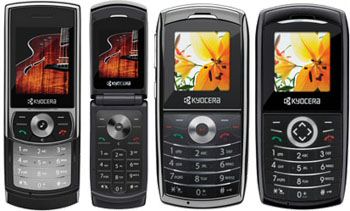 Finally the S1600 the low-end of the four Kyocera offerings which is a dual-band candy-bar design with VGA camera.

Shipping to Latin America is already underway and retail launches will undoubtedly commence on a carrier by carrier basis in the coming months.