Can you remember way-back-when when AOL was a major player in the internet service arena, along with it being the most popular when you get online to surf. Well unfortunately AOL’s internet service is somewhat down at the moment, however it doesn’t mean AOL isn’t doing so well on the World Wide Web as AOL has just launched their AOL Mobile Search portal for the Apple iPhone.

So what is AOL Mobile Search? AOL Mobile Search will serve up traditional web searches but will also include hits from AOL owned MapQuest, AOL CityGuide, and Moviefone. All content will be optimized for display on the Apple iPhone handset including inline phone numbers, and the search portal places priority on iPhone optimized websites and will show web searches with those websites at the top of the list. 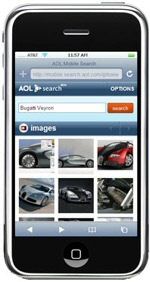 Want it? Ok, just point your Safari browser at “http://search.aol.com/” and try out AOL Mobile Search, and then let us know how you get on. And in the meanwhile take a look at the video below.