Unfortunately Canada isn’t privy to the newest and high-end mobile handsets that dominate the US; Rogers Canada is Canada’s primary GSM provider, and with a distinct lack of competition prices of GSM data plans are somewhat high on Rogers network.

But it seems Rogers customers may have something to look forward to , and whispers have it that Nokia’s N95 mobile phone is to hit Rogers GSM network on 2nd May. The Canada bound N95 should still incorporate a 5 megapixel camera, WiFi, GSM receiver, 3G HSDPA, and TV-out, and with a little help from Rodgers the Nokia N95 should be able to use video calls.
Any would-be Nokia N95 owner in Canada can expect to shell out in the region of $699.00 without contract.

Even more good news heading to Canada and for all those Canadian Apple iPhone hopefuls, you may soon be able to grab hold of a Rogers locked Apple iPhone. The Apple iPhone’s entry into Canada has been seen as one of the most costly GSM plans, but with Rogers “Communicate Value Pack,” a $20.00 unlitited data plan, Rogers is seen as preparing the path for the iPhone. 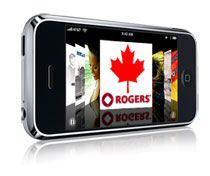 The Toronto Star cites industry sources as indicating that Rogers is preparing the way to launch a touch-screen handset campaign with the release of the Apple iPhone. Apple’s iPhone handsets are expected to assault Canada around May/July; this timing could be in line with getting the iPhone into Canada before RIM release the BlackBerry 9000 thus allowing Apple a head start in RIM’s own territory.