Mobile phone use whilst driving is illegal but texting still common

Everyone in the UK should be well aware by now that the use of mobile handsets while in control of a vehicle is against the law, and that also means texting. However, according to a new survey conducted by Nationwide Insurance (UK) on 1200 people, one third admitted they still multitask whilst at the wheel, scary indeed, but to go further, 37% said they actually text while driving!

Now unless you are some super cool mobile phone expert who knows exactly where every letter on every button is and can actually text a coherent text message whist being blindfolded, don’t have to take your eyes off the road for even an instant, I would suggest this activity is worse than actually making a call whiles driving, and obviously only undertaken by idiots who should have their right to drive removed. 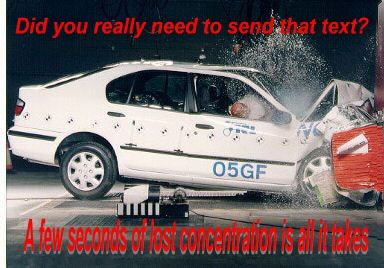 If you take in the consideration that Nationwide Insurance’s survey finding are correct and extrapolate that out, it means a very large portion of the vehicle driving public are simply not concentrating on the road or looking where they are going. So no wonder there are so many deaths on the roads, a short text that doesn’t really need to be sent could easily cost you your life.