I know this is not much of a comparison but maybe some of you would choose one mobile phone over the other. The two mobile phones we are on about are the Sony Ericsson XPERIA X1 and HTC Touch Diamond.

Personally I would have to choose the HTC Touch Diamond just on the looks alone, the photos below show you what the two handsets look like up against each other. Oh yes this is clash of the phone wars, these two phones are very much talked about and are expected Windows Mobile smartphones that will whoa your heart. There will definitely be arguments about these two phones where some will say the HTC Touch Diamond just looks hot and it has all the bits a mobile phone needs, but then many people will say the Sony Ericsson XPERIA X1 is the puppy to have because of the WVGA screen and the ultra-useful QWERTY keyboard.

Just so everyone knows just in case you have forgotten, the HTC Touch Diamond is smaller plus has the all new Touchflo interface which basically means (DAMN HOT). The downside to the HTC phone is that it does not have a physical keyboard. Please do take a look at the photos of these two phones side by side below this question.

The question is “Would you choose the Sony Ericsson XPERIA X1 or the HTC Touch Diamond? 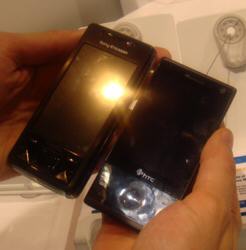 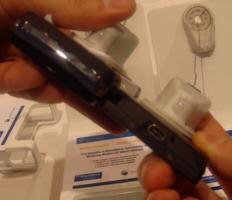 6 thoughts on “Sony Ericsson XPERIA X1 and HTC Touch Diamond Photo Comparison: What would you choose?”