Not saying it does, but not saying it doesn’t either, but this case rendering from third-party XSKN, the iPhone case maker sure does look like the whispers and rumours on the design changes everyone has been hearing about don’t you think?

Notice that larger more curved back, opened up space near the ear piece which could possibly hint at the rumoured front-facing camera perhaps? And what about what appears to be a non-recessed headphone jack? Aren’t all these thing what everyone has been talking about when it comes to Apples next generation 3G iPhone? 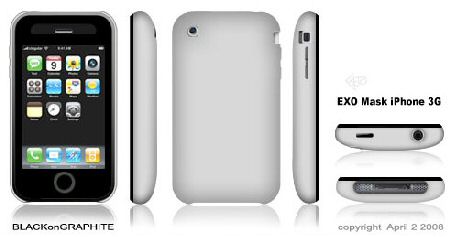 Yes, I’m sure this could be just a ploy to get everyone eager to see the Apple 3G iPhone and what it will look like to look at their pages, however this is still the first iPhone case design rendering that has been seen for anything other than the first generation iPhone. And yes we all know what Apple is like for pushing out anything that may direct people away from the real deal before it officially comes out.

Take a look, take a real long close look, and you decide if this could well be the first sighting of the new Apple 3G iPhone, and then let us know your views. My personal view is that it doesn’t look like the original iPhone handsets I’ve seen so maybe, just maybe this is the Apple 3G iPhone we’ve all been expecting. Come on Apple fess up and let us know if this is the real deal 3G iPhone.