If you are one of the many budding developers within the mobile arena and you are wanting to put your developer talents to work for Palm then you may be quiet interested in the slice of news. Palm, with the aid of DeviceAnywhere is opening the doors to its Virtual Developer Lab, which will allow developers to remotely access actual Centro/Treo handsets so they can test out their software. Developers will be able to capture screen shots, create an audit trail via capturing keystrokes and video the process.

To put it simply, developers will rent remote access to Palm phones by the hour in the physical world to do tests and make tweaks to their software. Developers will be able to collaborate on projects in real time or on their own to finish and bring those products to the market.

The remote access software incorporates a built in advanced reservation system which allow a developer to book time on a first come first served queue, and will alert the developer when it is their turn. 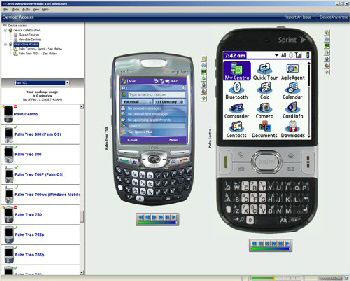 Palm Virtual Lab data centres across the globe will have 13 Palm handsets that developers pay $100 each month and between $13.00 and $13.00 per hour to access. This new opening of Palm Development Lab replaces its previous invite only lab for premium developing partners which excluded the majority of developers.

DeviceAnywhere has been offering remote demo access on a variety of mobile phones for some time, and Palm is now making an extra effort to ensure most developers know about it. This will probably spark talk about Palm’s declining presence within the mobile world.