Well it appears the luck of the Irish has run out as O2’s Irish rates for the Apple iPhone 3G have apparently been revealed on a fan-site, and it looks as if the iPhone 3G is going the same way as the original, and the Irish aren’t going to get the same sweet deal as offered the UK.

O2 will still be subsidising the next generation Apple iPhone 3G, although unlike over here in the UK, Ireland will not be getting any free deals on Apple’s latest, even on the 100 Euro contract with the 8GB it still isn’t free. 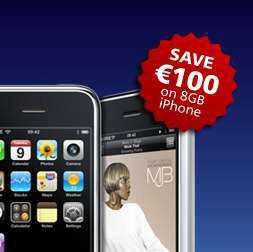 These tariffs include texts, Anytime minutes, and a 1GB data bundle along with a deal to bring iPhone customers free access to 155 Bitbuzz WiFi hotspots in Northern Ireland and the Republic of Ireland. Also, existing Apple iPhone owners who purchased their Apple iPhone since the iPhone launch back in march, they will not be in receipt of any incentives to upgrade or any extra subsidies.