Now here’s a novel idea, very inventive I must say. Orange has announced they are launching a freestanding wind powered mobile phone charging station which will be put at this year’s Glastonbury Festival. The wind powered mobile charging station is over seven metres in height, and is a freestanding “recharge pod” which is a self sufficient unit supported by a wind generator and solar panels, and will have the ability to charge up to one hundred mobile phones every hour.

Orange worked with Gotwind, a renewable energy company to make the recharge pod an evolution of the Orange portable wind charger tested at the Glastonbury Festival 2007. This recharge pod will be found within the Pennard Hill camping ground at Glastonbury, and is to be a free service which allows all festival goers to make use and charge their mobile handsets throughout the festival weekend. 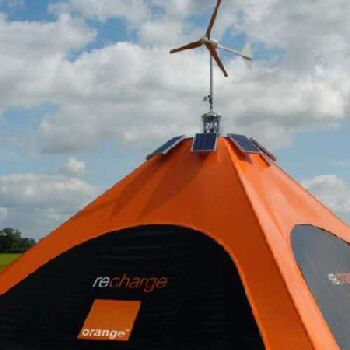 Over the course of the three day festival, it is estimated that the Orange recharge pod will charge thousands of mobile phones. Good on you Orange it is about time someone in the mobile arena actually did something for nothing, well almost nothing as think of the promotional value, and of course thousands of people praising Orange for a great service at the Glastonbury festival. It’s a pity other carriers didn’t come up with the same idea.