Not too sure what exactly what Microsoft is up to with this patent app for a mobile phone that seems to have a slide-out keyboard, numeric keypad and flip-up display, but it is assumed that it is based around the idea that a user wouldn’t need to known the ins-and-outs of the inner functions of a computer if given enough hardware controls.

According to this application, “in device mode, the computing system truly assumes the look and feel of a less intimidating multi-media device, rather than that of a sometimes more intimidating computer.” Furthermore the keypad allows the user to simply start dialling to use the mobile phone. 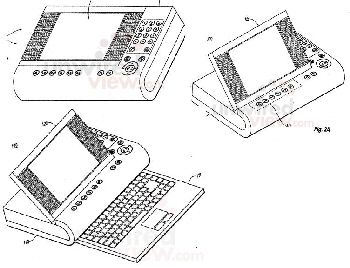 So apparently this patent show a device that can be used as a mobile phone when in the closed position, a multimedia player when screen is open, and can also be used as a portable PC when the screen is open and keyboard extended. So if we take this into consideration it’s either an extremely small and compact portable notebook PC or an over-large mobile phone.

So why do Microsoft believe the populace require such a device? This is what Microsoft has to say… “Making a telephone call using a computer involves knowing what application is used on a computer to make a call, starting the application and figuring out how to use it using input devices attached to the computer like keyboard and mouse. Instead if the device had a hardware keypad that is normally used in a telephone, along with appropriate software then dialling a call would just involve pressing “Dial” button, followed by the numbers to be dialled on hardware keypad and the required software will come up and complete the call for the user. In this way the interaction of the user with the device would be the same as the interaction with a special purpose device for making a telephone call.”