The boys or in this case girl in Brussels seem to be again shoving their noses into Britain’s business, and this time it could prove most unpopular if their proposals to charge mobile phone users for receiving calls, even when in their own country are pushed through.

EU telecoms commissioner Viviane Reding is the one putting forward the proposals, and she spoke to the Financial Times saying she was open to the concept in exchange for lower termination rates, or charges between networks. 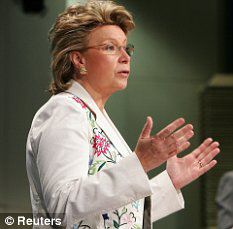 During the interview Reding said: “The whole market is developing, so we should not stay on the rules that have been in place 10 years.”

Reding has also been pushing a campaign for lower phone charges in the EU, more notably roaming charges which can be as much as 50 pence per minute for outward going calls. However, if these other proposals go through, a system could be imposed on domestic calls similar to that for customers who take their handsets overseas and have to pay up to 19pence per minute to receive a call.

Apparently the EU has already put caps on these charges, although some sceptic state that any benefit to mobile phone customers would be short lived because the mobile phone carriers would just find other ways of making their profit, like maybe hiking up the charge of a text or even accessing the internet via mobile phone.

Apparently the Commission will present its recommendation before the end of this month.

Personal thought: Brussels should butt out of British business, we haven’t felt the need to charge for incoming calls so far so why should we now? We are still a sovereign nation, we have our own laws and our own government, and if anything it should be they not Brussels who have the final say on this matter. Ask the British mobile using public what they think and the answer probably wouldn’t be able to be published due to profane language.