Does the HTC Diamond Touch the Apple iPhone 3G? 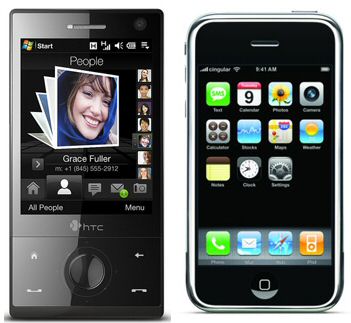 HTC announced a plan to sell the Touch Diamond in Taiwan for NT$2,999 that’s roughly $99.00 US on certain 3G contracts from Chunghwa Telecom. This dramatic price drop from the original price of NT$23,900 roughly $786.00 US!

So it’s shaping up that HTC is now preparing to offer the Touch Diamond for roughly the same around the world as long as they can strike a deal with service providers of course. The $99.00 US sure beats to a pulp Apple’s $199.00, so the Touch Diamond should do well against the Apple iPhone 3G.

The Touch Diamond is a good phone with a superior camera than the 3G iPhone and other extras that will help make it a good rival, as long as HTC is able to spread its new Taiwan price of US$99 to other parts of the world.

What is your view, would you prefer the HTC Touch Diamond over the Apple iPhone 3G if the price is right?

13 thoughts on “Does the HTC Diamond Touch the Apple iPhone 3G?”