Three rivals line up for battle each one an enemy to the other, who will fare the best, who will come out victorious in the showdown? Which mobile phone will come out tops between the Samsung Instinct, the LG Dare, and the Apple iPhone 3G?

The best way to get started is by running a little speed test, the Samsung Instinct data services seem to be jacked while with the LG Dar and Apple iPhone squaring off, the LG Dare consistently besting the iPhone 3G by somewhere between 50-100kbps over Verizon’s EV-DO network. 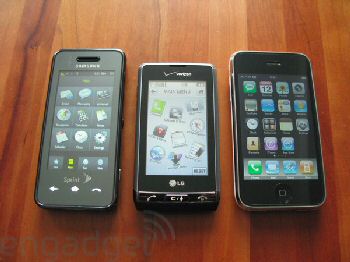 Although that doesn’t necessarily say the LG Dare is consistently faster than the Apple iPhone 3G or Samsung Instinct as it has everything to do with the network in the area, the circumstances, the time of day, and even maybe which side of the bed you fell out of this morning, or possibly how well charges the battery is, so nothing really conclusive. 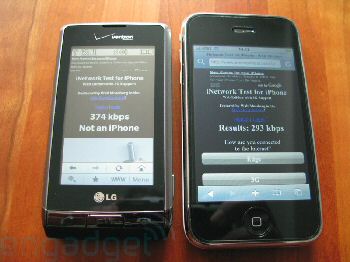 Interesting though. Anyway, speed tests on the Samsung Instinct to follow shortly, and possible another round pitting the Dare against the iPhone, so keep an eye out.

3 thoughts on “Battle between LG Dare Samsung Instinct and iPhone 3G! Who wins?”