So are you one of those clever people who have been thinking you’ll avoid the chaotic rush and just hold off until you get the Apple iPhone 3G, maybe avoid those long lines by waiting a few days to let it all subside?

Well if you are then some bad news is about to come your way. Your wait is probably going to be a tad longer than you expected as apparently, Daring Fireball has done a bit of snooping and found out that Apple’s iPhone 3G supply in the US is virtually none existent at the moment. 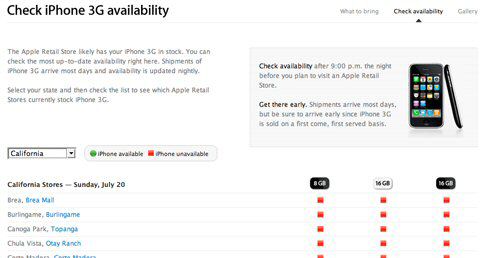 This follows rumours that there are iPhone 3G shortages and is looks as if virtually all stoke is now hitting the empty line.

Here’s what we’ve been hearing… in California there’s one 16Gb black iPhone 3G, in Hawaii just one 8GB iPhone 3G, while in Apple’s flagship store in Manhattan a single white 16GB iPhone 3G.

One can safely say that Apple’s predictions on supply and demand are just about as bag as everything else to do with the launch of the iPhone 3G. One would have presumed they would have at least made sure they had enough stoke to supply their own country.

We’ll let you know if we hear when and if Apple will be re-stocking stores, but other than that the wait is on.

One thought on “Apple iPhone 3G US stock runs out…where next?”