The C902, as used by James Bond will become available for a limited period only, and will come with a memory card packed with James Bond goodies, including an exclusive spy style mobile game. 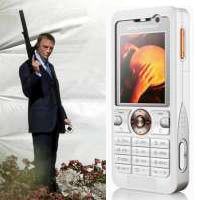 Also included in the special James Bond content will be a full colour movie trailer, exclusive wallpapers and screen savers, and behind-the-scenes interviews with the stars.

In the latest James Bond movie the Sony Ericsson C902 Cyber-shot mobile phone is constantly use by Mr. Bond to capture evidence and to assist in his secret agent mission.