With the Olympics running in full flow it is obvious business are going to try and cash in on a little media coverage, and now it is the turn of Intel and Lenovo, who have teamed to release a free mobile phone widget via Zumobi.

Everyone wants to get in on the Olympic news, business want to grab some spotlight advertising while ordinary folk just want to keep abreast of what is going down in Beijing.
Well with this cool Lenovo/Intel widget is showcases content from lebovo’s “Voices” and “Olympic Podium” websites, and will keep mobile phone users updated on the news and athletes in Beijing. 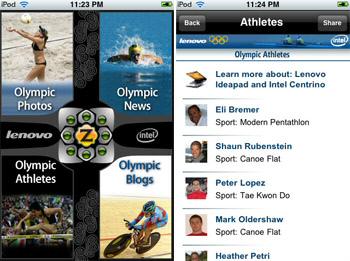 The Olympics widget uses the “Zumobi 4” interface, which no doubt existing Zumobi fans will be delighted with. The mobile Olympic widget by Lenovo and Intel is available on Windows Mobile 5 and 6, BlackBerry Curve, Pearl and Series 88xx, and for the first time the Apple iPhone.