Seems like Canadian carrier Rogers has let slip the pricing on the BlackBerry Kickstart 8220, and this image show the marketing material for said mobile phone. 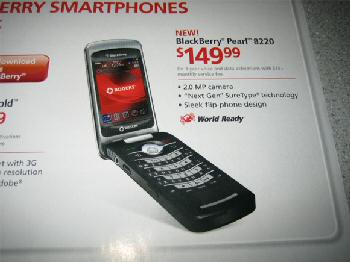 Seems a tad expensive, and there is no word on whether Rogers intends adding further price plans, rebates or deals. Maybe Rogers will drop this price a little later on, as a below $100.00 might be just enough incentive for people to actually consider the BlackBerry Kickstart 8220.

Although if you are intending on spending your hard earned cash on a BlackBerry, at that price maybe you may just give the recently launched BlackBerry Bold a thought.