With the expected release of the Palm Pre getting nearer, it is obvious we are going to see more and more images surface, and although we aren’t too sure where this particular Palm Pre image surfaced from it appear to show the Palm Pre possibly running YouTube and email WebOS.

No doubt by all the images surfacing there is a Palm Pre out in the wild, so one could take this image as true and fact, but with all the photoshoppers around today one can never be certain. 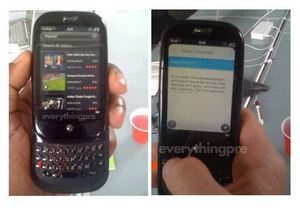 Two images of the Palm Pre showed up on Twitter posted by a Twitter fan called lo_toney, courtesy of everythingpre but there’s no information as to just where this Twitter fan captured said Palm Pre images.