Looks like Verizon will have to wait for the Google Nexus One at the moment, but there is good news for Vodafone UK consumers because a release date is coming soon.

Vodafone has now updated its Nexus One webpage, it now says coming soon. We visited Phandroid and they say that it is coming soon in April and the image below shows this, but we visited Vodafone UK and it just says coming soon and no April can be seen, so what are we missing here. 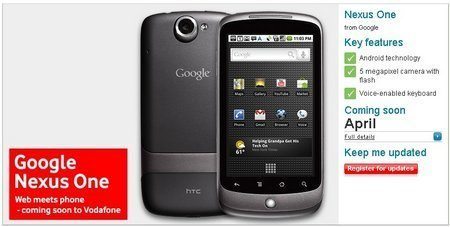 Now we think this is an error seeing as we cannot see April shown on the site, anyway we are hoping that it will release this month.

On the Nexus One site it says that the Verizon Nexus One is coming Spring 2010 still, now we mentioned earlier that the N1 is having 3G connection problems and it is nothing to do with the software or hardware and could possibly be a T-Mobile problem, well you have to hope that Vodafone does not have the same issues.

Do you really think Verizon would want the N1 if it has problems, we think not so stick with the HTC Incredible.